This is the first of many posts about a new stained glass window for Our Lady of Guadelupe Church in Doylestown Bucks County, Pennsylvania. I will be posting progress photos regularly as the fabrication of this window gets under way.

The first photo below shows my watercolor design for this window. This is The second large window the Beyer Studio has made for Our Lady of Guadelupe. In 2016 i designed a large new window for above the Altar in the daily mass chapel. The second photo below shows this window installed. the Monsignor wanted a design featuring a scene of Pentecost combined with an Ascension of Christ. This resulted in a rather busy composition. I have had numerous opportunities to make windows on the Theme of Pentecost and I always try to make them reflect the “mighty wind” that is described in Acts.

This new design will be located within the same daily mass chapel, in a separate shrine off to the side. This is still a rather large composition with a somewhat strange configuration of openings with a middle opening that is narrower than the flanking sides. The frame is aluminum store-front type and moldings have already been added to secure the stained glass.

Monsignor requested a scene of the Virgin and the infant Jesus surrounded by angels representing the various choirs as they are known historically. I thought that this was a great opportunity to draw lots of figures in appealing poses. The Monsignor and I were both blessed with a donor couple who funded the Pentecost window and would now make this window possible too. Most importantly, the Monsignor not only values the arts but would allow me to design something truly original and not simply concoct a reproduction of some antique style. So when you have a good budget and people with taste, you take that ball and run because those essential ingredients don’t come together very often.

Above: Watercolor design for Our Lady Queen of Angels Window, October 2018.

Above: Pentecost Window as installed over the Daily Mass Chapel altar at Our Lady of Guadelupe Church. The new Queen of Angels window would be installed adjacent to this in the same chapel. 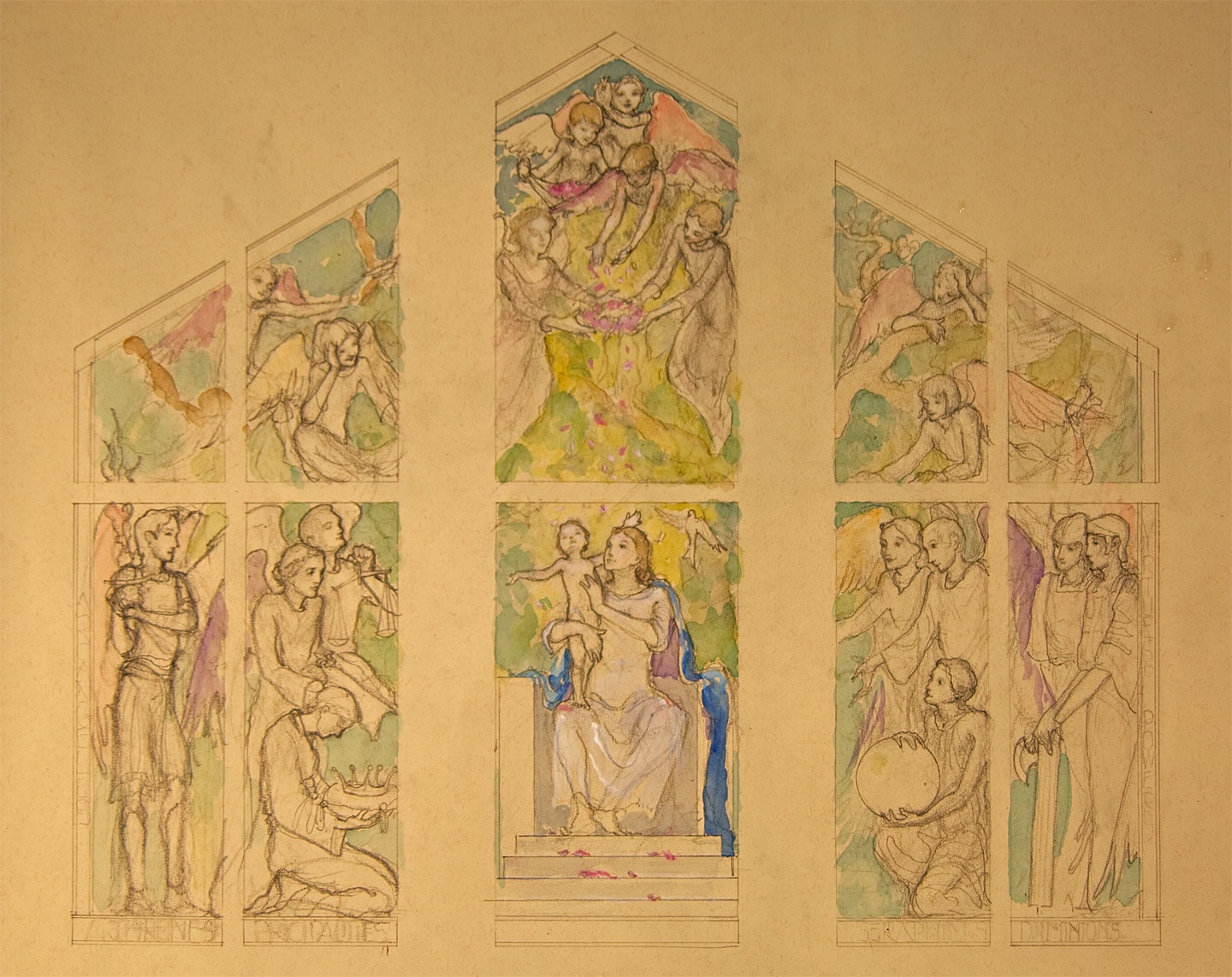 Above: Here is the first sketch of a possible design for the Queen of Angels window. This is pencil on toned paper with watercolors. I was imagining a sylvan scene with the Virgin and Child group seated in the center. With the horizontal division where it was placed, I thought that the best arrangement would include a lower register of figures, some kneeling and some standing. Above and behind them would be more figures. In this version, these are mostly youthful and placed casually. I planned to have a green background of trees instead of a deep blue.

This was well received so I proceeded to a second version with some changes suggested by the Monsignor. He asked if I could include Lucifer being driven away and I was quick to agree. While he was a frequent star in antique windows, we are rarely called upon to include the devil in our compositions.

Above: Here is a second, more developed version, again pencil on paper. Now the devil appears at top left and a couple of tough looking archangels are glaring at him and gesturing him out of the picture. As in the first sketch, the angels are holding attributes representing the various choirs of angels, Powers, Dominions, etc. Check out ” Nine choirs of Angels” on Wikipedia, Some of the angels are spanning over the horizontal mullion to help connect the upper portion of the window with the lower register. The youthful angels are now collected in the center above the Virgin and will serve to direct attention back downward.

Above: Here is a third version that incorporates yet more modifications from Monsignor. The devil is pushed more towards the background and other angels in the foreground have been moved up to obscure him from view. The Hand of God has changed to something smaller, in a better scale. The Border changed to something more contemporary. Virtually every detail has now been taken to a more specific degree of finish. This version met with final approval and so color was added on the same paper when the pencil drawing became the watercolor seen above. These three design versions probably occupied four months of time fitting work on them in with other projects.. The next phase after the approved color version will be full-scale cartoons.